For all the Pipe And Box Cutting Machines that manufactured by JINFENG WELDCUT will be delivered to End-user with 2 years warranty, and which are Equipped with a chuck to clamp the round pipe, box tube and turning the pipe during cutting, supporters for pipe. The plasma cutting torch and oxy flame cutting torch are mounted on the moving carriage which can move along the length of pipe . The machine supports all CAD-CAM interfaces as options. The XQG Pipe And Box Cutting Machines are the most advanced thermal cutting machine for pipe to increase the productivity for End-users from different industries.

1.The XQG Pipe And Box Cutting Machines can offer high quality bevel cutting, hole cutting, vertical cutting for to reduce the mass works in next and make easy for welding connection in the next process.

2.The pipe cutting machine can be fully integration with the MES system and Allow remote control via team viewer for the engineers from manufacturer to easily carry out the remote diagnosis to solve the problems via internet without sending engineers to the working site.

3.The CNC software support the cutting operation and manual programming of parts based on the macros integrated in CNC. The CNC has a import interface for the data file exported from TEKLA design software.

By adding XQG Pipe And Box Cutting Machines to the production facility, the End-users from different industries can increase their production and reduce the labors a lot. 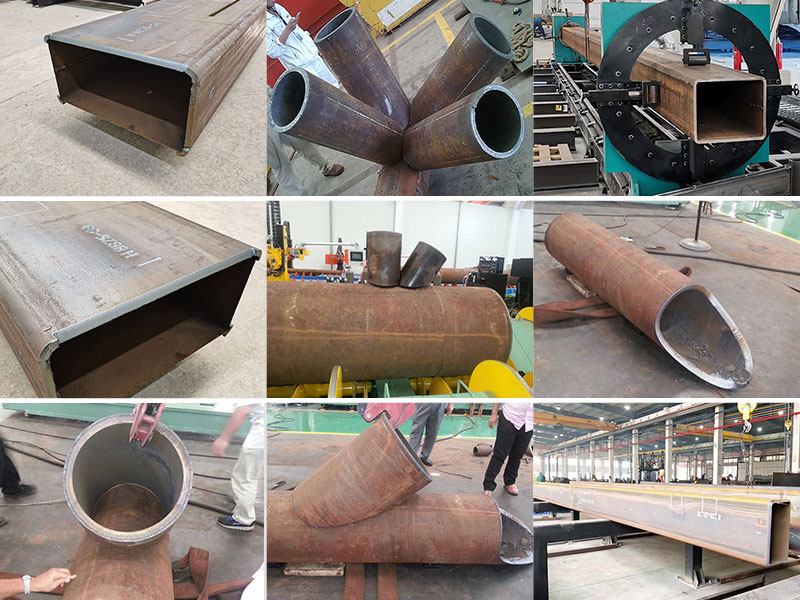 The CNC main control unit is an industrial controller, integrated with touch screen. With the hardware board card interpolation, the CNC has a reliable stability and easy and convenient wiring. With the standard G code, it is easy for operator to learn and operate on the machine. The CNC system supports 3 operating modes: Flame cutting, Plasma cutting and demonstration. For round pipe: The round pipe one end is clamped on the chuck, the other end is supported by free supporter. The power of chuck to turn the pipe rotating for cutting with the cutting head to realize the automatic cutting.

For SHS pipe: One end of SHS pipe is clamped on the main chuck, the other end is clamped on a 4 side chuck. Both of the chucks will turn the SHS pipe to rotate synchronization to realize the automatic cutting on box shape tubes and pipes. The moving cart is moving in the length of the pipe to bring the cutting head to cover the whole length of pipe to realize the cutting on pipe with different length. It is used for the supporting of the pipe in length with several sets of supporter. The pipe supporter is controlled by a bidirectional screw sliding nut, and the sliding nut is equipped with a bias support frame, which can be adjusted to suit for the different size of the pipe diameter. Rolling wheel bracket can be moved along the longitudinal rail on the base table, so the supporting point can be adjusted according to the length of the pipe.

Please feel free to give your inquiry in the form below. We will reply you within 24 hours.